Skip to content
Twitter demographics poses more opportunities for brand engagement
As you can see from the chart below (and if you give a sh-t), more than 30% of Twitter’s visitors were under 25 up from about 20% of its visitors at the end of 2008; thank you in part to celebrity adoption and the mainstream media mentioning Twitter over 20,ooo times last year on television (can’t find the source). Twitter has also extended its global reach expanding in Indonesia, Japan, Mexico …
Kids Don’t Hate Twitter Anymore! [Chart] (pamorama.net)
Is Twitter getting younger? (liesdamnedliesstatistics.com)

Mattel’s Puppy Tweets Collar
Mattel’s Puppy Tweets collar ($30) is equipped with a motion and sound sensor to help it somehow select which of the 500 pre-recorded Tweets best describes what your dog is doing. It then beams the Tweet wirelessly to a USB receiver, which in turn updates the Twitter account you’ve set up. Christ.

It seems my old mate Spencer Baim is kickin’ ass down at Virtue (the company he founded with Vice Magazine). The idea was to create a company that would add credible Vice-like mojo to brands and activate through Vice’s various media and experience channels. I just came across this article about “How Vice, and Virtue, Are Helping to Sell Brands” – seems they have picked up an AoR assignment …!
“Starting in January 2010, Virtue will serve as the agency of record for Palladium’s global creative and media accounts as the boot expands its relaunch campaign into countries like the U.K., Germany, Holland, Hong Kong, Japan, the Phillippines and Taiwan in the coming months, all markets where Vice has a presence.”

Consumers Defect From Iconic Brands
Consumers are defecting from iconic CPG brands as they try to save money by purchasing less-expensive store and private-label brands. While this trend is not new, it has become more pervasive since the economic downturn started in December 2007, per eMarketer. In fact, 59 percent of U.S. consumers reported having switched to store brand food and household products over the past six months, according to a May 2009 study by ICOM.

Recession Intensifies ‘Couch Potatoism’ as TV, Internet Converge
Some 26% more Americans chose TV as their favorite type of media than they did last year, according to a new study by Deloitte, which lends credence to the theory that the recession has intensified America’s love for television. The study revealed that more than 70% of respondents ranked TV among their top-three favorite media activities; 34% placed it at the top of the list. TV also snared more than double the numbers of the second most popular media choice, the internet, which came in at 14%, according to MediaBuyerPlanner.

Seppukoo: Is There Life After Facebook?
Seppukoo.com is a social website which “liberates the digital body” by deactivating one’s Facebook profile and shaping a social experience out of it. It is meant to reflect seppuku, an ancient practice in Japan in which a samurai warrior kills himself to restore their honor. It was created by ”Linking the Invisible“, a group of European media artists (Guy McMusker, Clemente Pestelli and Gionatan Quintini), who explore the invisible relationships between the “infosphere, neural synapsis, and real life.”

Architizer: The Facebook for Architects
One such digital pioneer is brand-new social networking site Architizer, which is being promoted as a “Facebook for Architects” and will allow “architects, architecture curators, clients, critics and fans, to interact”.Â The site, which is free to use, allows members to link their personal, firm, and project profiles where they can display a new building, share photos of interesting projects, and have their work pinpointed on a global interactive map. 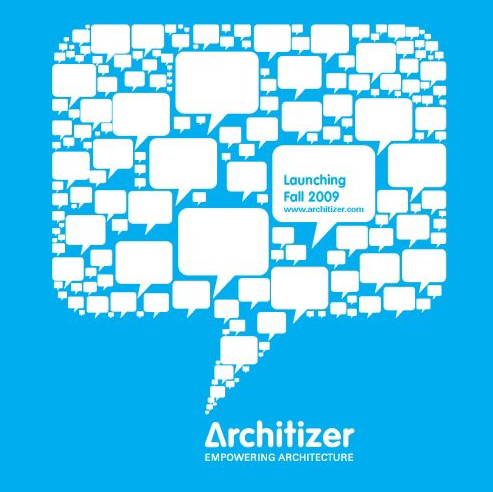 Toyota plants big Prius flowerscapes next to California freeways
The 2010 Toyota Prius is being promoted with flowers—up to 180,000 of them, to be exact. The automaker is creating nine “harmony floralscapes.” The first, which used 20,000 flowers, was unveiled this week alongside the Pasadena Freeway in downtown Los Angeles. Greenroad Media has found a way to recreate images using its “Living Pixel” technology and living flowers. In this case, what looks to be an orange Prius sits within a sun, using 60 feet of flowers. The floralscapes are required to be non-commercial in nature, so the designs are meant to capture the essence of Saatchi & Saatchi L.A.‘s “Harmony Between Man, Nature and Machine” campaign for the Prius. Seven floralscapes, in a number of different designs, will be planted in L.A. Two will pop up in San Francisco. Only organic and reusable materials were used for the project, as well as non-potable water and solar electricity. 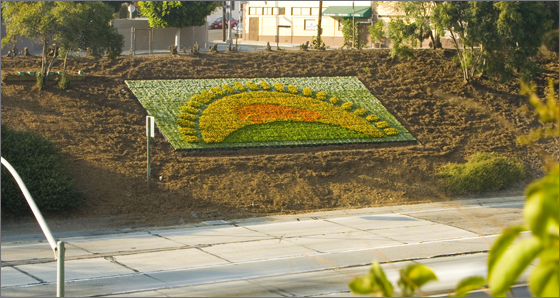 Toyota Uses Subtle Approach In Prius Effort
Toyota devoted a chunk of its marketing budget for the 2010 Prius to experiments with non-traditional ways of using traditional media. The resulting programs have been more art installation with environmental and interconnectivity than “Buy Prius Now.”
Big driver behind out-of-home: Digital
Veronis Suhler Stevenson has become the latest to forecast a comparatively brisk future for out-of-home media, and for that much of the credit goes to digital. The increase in digital billboards, video advertising networks (VANs) and alternative ambient advertising, which is included in digital estimates, has driven much of the growth of the OOH industry the past few years, and it will continue to do so at least through 2013. The media investment banking firm forecasts that out-of-home ad revenue will post a 4.9 percent compound annual growth rate from 2008 to 2013, compared to a 3.3 percent decline for traditional advertising.

Marketing ‘Gravy Train’ to Derail by 2020
Overall, an aging population, decreased spending, higher demand for products that target older and ethnic consumers and a fragmenting mass media landscape will present a multitude of challenges for marketers, especially in terms of redefining the concept of market share and competing for a piece of a much smaller pie.
“Marketers in the US and throughout the world are not accustomed to a shrinking pie, but rather are used to thriving marketplaces with robust spending growth,” said Doug Anderson, Nielsen SVP, research & development, who wrote the analysis. In the near future – and for decades to come – this growth gravy train will be off the tracks, Anderson said. “Growth will only come from increasing share against competition. The new consumer marketplace of the US will bring new relevance to the phrase ’share wars’.”

Marketers Frustrated by Digital Cross-Channel Chasm
The study, “The Digital Horizon: A Chasm between Expectation & Execution,” reveals that the advent of digital and other new forms of advertising have created a large gap between running a campaign on multiple channels and actually integrating those channels in a unified way. Worse, though many marketers desire better integration, they are frustrated because they can’t meet their goals using existing systems.

Banksy At The Bristol Museum
Throughout the summer, visitors will find some unusual specimens amongst the museum’s permanent collection – a stonehenge made from portable toilets greets visitors on arrival, a burnt out ice cream van now replaces the enquiries desk and the life size historic biplane suspended from the ceiling now provides refuge for a Guantanamo bay escapee. Banksy has filled the museum with his own wry take on classical art.
#IranElection And The Death Of News As We Knew It
People are sharing bit.ly briefened links to video taken and uploaded minutes before and other protesters in Tehran hold their phones up high to record and share their activity with Iran and the outside world. The developments in the use of the web to share, access, edit and discuss information about the crisis in Iran show just how modern news organizations are failing to deliver news in the way the public want to seek it. Iranians and observers abroad are using right this minute Twitter, blogs, Flickr and YouTube to share information about what is happening within Iran at a speed that has left mainstream media off-foot.
16MM Movies at Secret Locations
The Guerilla Drive-In is an organization that projects 16MM movies in interesting locations in and around the West Chester, Pennsylvania area. Since 2007 the group has staged secret film viewings in settings that match the theme of the movie being screened. For example: Caddyshack was shown at a golf course, Meatballs at a canoe rental company and Ghostbusters at the supposedly haunted Fort Mifflin.
Majority of US Population Lumps Asian Americans Together
The report (pdf), which draws on findings from two studies – one of the general population and one of a smaller sample of Chinese Americans – revealed that at least 28% of the general population rarely or never interacts with Asian Americans, and the majority of the general population cannot make meaningful distinctions between Chinese Americans and Asian Americans.