Skip to content
Alex Bogusky Tells All: He Left the World’s Hottest Agency to Find His Soul
“Alex Bogusky, the Elvis of advertising,” writes FastCompany ” has left the business. Is this a New Age midlife crisis or his greatest rebranding campaign? The philosophy behind much advertising is based on the old observation that every man is really two men — the man he is and the man he wants to be. –– William Feather”

Filling in the blanks. Part 1
Alex gives his version of events on his blog …

Two Ad Students Make Cross-Country Pilgrimage to CPB
Meantimes, “two Miami Ad School students, Santiago Cosme and Vicor Javier Blanco, on September 3, plan to travel from New York to Boulder without spending a dime. The pair hope the kindness of strangers will feed, clothe, house and transport them to advertising nirvana.. Why? We have no idea. They aren’t even seeking a job at the agency as far as we can tell.  They’ve got a website, a Facebook page, a YouTube channel, a Twitter account and a Foursquare account. Whether or not the pair ever make it, we’ll know everything there is to know about their journey thanks to social media.”

Urban Outfitters Creates A Fake Neighborhood Block For New York City Store
Urban Outfitters, a Philadelphia-based retailer, is opening up a new store in New York City that will resemble a series of local mom-and-pop shops. The store’s facade would be split into four storefronts to look like a hat store, a hardware store, a neighborhood bar and a bodega, all reminiscent of what New York City once looked like. Ron Pompei, creative director of Pompei A.D., which designed the store says: The whole idea was to do this kind of ironic statement of lining the building with storefronts that would be reminiscent of independent businesses. It’s the story about the streets of New York as they once were.

(Pic) Dutch Hotel Is Your Temporary Home Away From Home
With the help of Dutch architects, WAM architecten, Inntel Hotels’ newly designed hotel pays homage to Zaandam’s industrial history. Situated minutes via train from Amsterdam, Zaandam, was one of the world’s premiere hotbeds for industry and an ideal place for construction as its rich history was modernized through the playful design for Inntel Hotels‘ new location. The unique structure is comprised of stacked green wooden houses popular to the Zaan region, symbolizing that the hotel is your temporary house.

A pile of modest, traditional houses stretching into the sky (boingboing.net)

Retail Watch: For a new store at Broadway… (ny.curbed.com)

Much of a Dutchness: the Hotel Inntel Zaandam (guardian.co.uk)

Roadside America: 11 Relics of the Lost Highway
For 30 years John Margolies has been documenting the diners, drive-ins and motor lodges that remain along our highways as box stores and strip malls slowly erase the quirk and character of consumerism. His book Roadside America collects nearly 400 photographs of this vanishing vision of over-the-top architecture, automotive freedom and the American dream. 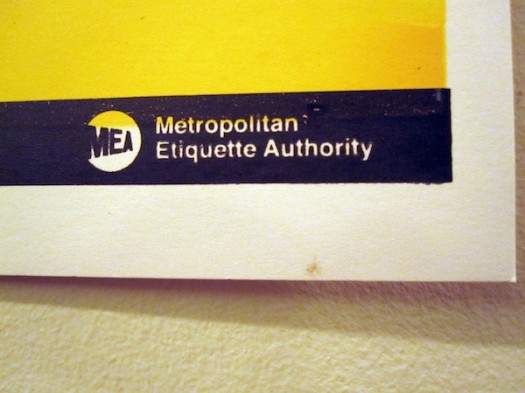 Steven Grasse Does His Own Thing, or at least that’s what Piers thinks. At the recent PSFK New York Conference, (self described) “maverick creator-entrepreneur” Steven Grasse closed out the day’s discussions with a spirited talk about his journey from “disgruntled ad man to revolutionary businessman”. He spoke candidly about his inspirations, trials and tribulations, and his passion for living a life driven by art, authenticity, and conscience.

I have been an admirer of Mr Grasse’s work for some time, since seeing him and his team (from Giro as it used to be called) present credentials to my then-client Virgin Mobile. I had been particularly impressed with their Camel Lounges and work with Sailor Jerry. I later learned he invented one of my favorite drinks (Hendricks Gin). Such is the esteem in which I hold Mr Grasse I can (almost) forgive his rather strange views on English people…

Piers Fawkes, New Yorker Of The Week
David Weiner, the New York editor of Huffington Post, recently interviewed the purple one about living and working in New York City – a city he has lived for seven years. The hirsute high-brow waxed lyrical about the change effecting the creative industries they work in; public art; and my plans for the ‘Alleyway of Ideas’. Hopefully Piers’ thatch of hair will prevent his head from becoming too swollen! 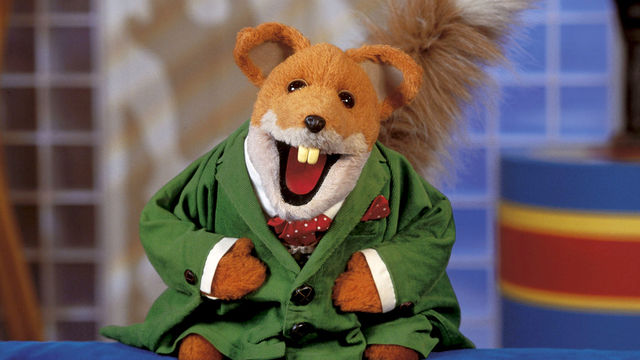 Sly Bailey. Trinity Mirror chief’s pay rises to £1.7m
Sly Bailey (nee Grice), the chief executive of Trinity Mirror, pocketed an overall pay packet of £1.68m in 2009 despite the company reporting a 41% slump in pre-tax profits during the year. Bailey, the highest paid director at Trinity Mirror, netted a basic salary of £736,000 and a cash bonus of £671,000 in the year. Her overall remuneration, including a £248,000 pension contribution, rose to £1.68m, compared to £1.53m the previous year.

Dave Nottoli Takes Over as Head of Account Planning at Digitas Boston
Digitas announced that Dave Nottoli has joined the agency’s Boston office as SVP/head of account planning. Before signing on with Digitas, Nottoli spent a number of years as a senior planner at Wieden + Kennedy before taking on planning director jobs at Lowe and BBH New York as well as co-founding planning network Open Intelligence Agency. Nottoli–who lists “understanding context” and “developing tight and differentiated strategies” among his strengths on LinkedIn–replaces Chris England, who moved to Digitas London to take on the role of global strategic planning director.

I worked with Dave at Fallon and he’s great!

Happy ‘Pat Fallon Day’ !
In recognition of Pat Fallon’s years of hard work helping to build and cultivate the advertising industry in Minnesota, and in honor of his induction into the American Advertising Federation (AAF) Hall of Fame, Mayor R.T. Rybak has proclaimed March 25, 2010 to be ‘Pat Fallon Day’ in the city of Minneapolis.

Rosemarie Ryan and Ty Montague Depart JWT to Start Their Own Shop
JWT’s top two North American executives are departing the WPP-owned network to start their own agency. Rosemarie Ryan, JWT’s co-president since 2004, and Ty Montague, its chief creative officer and co-president since 2005, have had both successes and setbacks in their tenure at the shop. They are credited with leading a resurgence of sorts in JWT’s large New York headquarters, which has seen its creative reputation improve and was bolstered by a major influx of Microsoft business beginning in 2008. But the pair also oversaw the virtual shuttering of JWT’s storied Chicago office and the folding of its standalone Detroit operation into WPP’s hybrid “Team Detroit.” In the past year it has also parted ways with key Kellogg’s business and saw its Jet Blue account go into review. 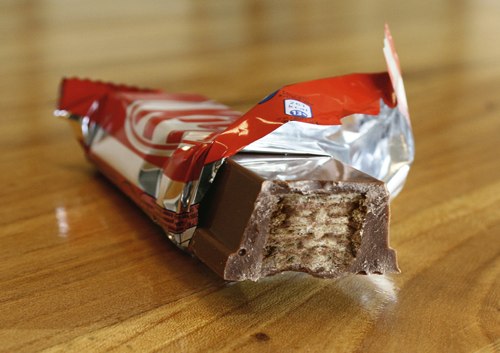 16W21: model apartment
The promotion for zac posen’s first residential project 16W21, has manifested itself in a saucy campaign using voyeuristic photographs of cosmopolitan dolls living out the ultimate bachelor lifestyle. ‘the model apartment’ ad series was developed by creative agency imagination, aimed at a narrow audience of creative types. the primary visual of this campaign consists barbie and ken-like model dolls engaging in suggestive activities. while the themes are racy, the use of dolls adds an element of humour and fun seeking to capture the attention of the young creative crowd. zac posen was the interior design advisor of the 16W21 apartment residence which is found in the beaux art ladies mile district of new york.

Posen’s 16W21: A New Kind of Design
Zac Posen’s newest project, the new condo building 16W21, has been gaining quite a bit of buzz. The famous 29-year-old fashion designer and Anna Wintour protégé has been keeping annoyingly mum about the whole thing but snippets of information from others in the know have given us something to report. Posen’s real estate venture was scheduled for its grand opening March 18, but we all know how real estate works (read: always behind schedule). The building is located between Fifth and Sixth Avenues on 16 West 21st St. in New York. It is 14 stories divided into nine units, stocked with one garden townhouse, five full-floors, two duplexes, and a triplex penthouse. While the prices on the penthouse are still TBD, the rest of the apartments are set in the $2 to $3 million price range.
Live In Zac Posen’s World
In case one wasn’t enough, Zac Posen’s managed all four. The latter, a building in Chelsea at 16 West 21st Street, is being billed as “The Model Apartment,” including a poster and video campaign in which dolls replace actual models, but appear to live a model-like life (as in perfect).
Dolls, Apocalyptic Rock Used to Sell Zac Posen Condos
One of the most anticipated new building launches this spring is the sliver of glass—yep, the design blends perfectly with its Ladies Mile Historic District neighbors, except that the facade is entirely glass—at 16 West 21st Street. In many ways the building is a throwback to happier times for the real estate industry. It has a name architect and decorator (fashion designer Zac Posen is handling the interiors, though some doubt his commitment), a boutique quality and an expensive marketing campaign that’s not shy about being exclusive.

Iceland wants to be your friend
Iceland Wants to Be Your Friend is an initiative of the Icelandic Tourist Board, “which means that it’s a very, very, very serious thing indeed. It is loved and cared for by many good people for at Takk Takk, using brains and fancy machines.”

San Francisco’s BART Adds Augmented Reality
San Franciso’s subway system, the BART, is the latest entity to use augmented reality to grab customers’ – or in this case, riders’ – attention with a message. Developed by metaio, the application – called junaio – shows transit data such as station locations and estimated arrival times. Riders point the phone’s camera and find directions to the nearest BART station and a list of estimated arrivals for the next several trains via text or graphics that are overlaid on real objects. 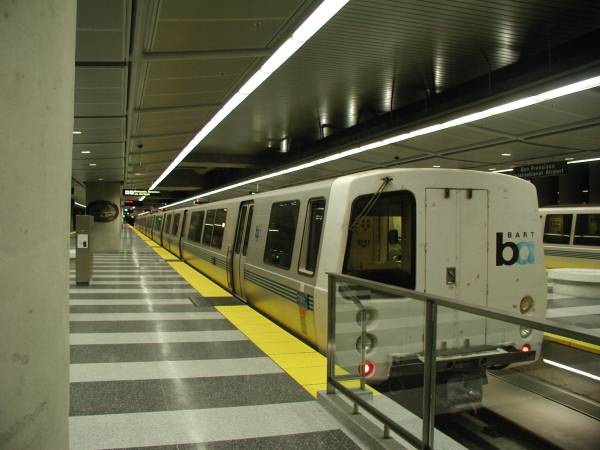 Absolut Drinkspiration
Absolut is launching Drinkspiration, a drink application combining the latest mobile technology with GPS, Twitter, and Facebook. Drinkspiration is an interactive encyclopedia of recipes that helps you find and share personalized drink recommendations based on taste, weather, time of day, bar vibe, sound volume and real-time drink trends. Drinkspiration by Absolut for Android is available for free in the Android Market. 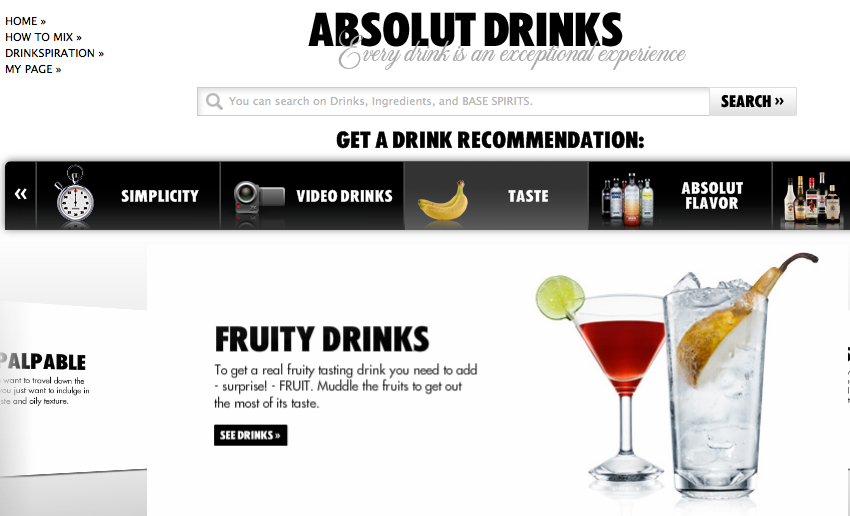 Jetblue Twitter promotion attracts huge crowds
Huge crowds gathered across New York this week after budget airline JetBlue announced via Twitter that it would give away airline tickets at undisclosed locations across the city. Hundreds of tickets were given away within minutes of each location’s being announced, with long lines forming and one taxi driver abandoning his vehicle (and his fare) to claim a free ticket. 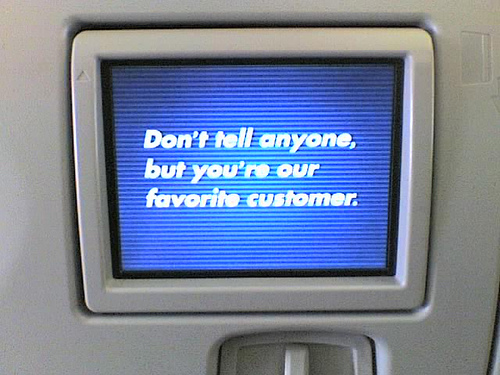 Delta’s DOOH Campaign Targets New York Frequent, Int’l Flyers
A digital out-of-home campaign aimed at increasing awareness of Delta Airline’s flight schedule in the New York City area accomplished its task – by a measure of more than 28%. From February to mid June, the airline and its ad agency, Digitas, ran a campaign using both DOOH and traditional media. Edison Research, which surveyed consumers prior to the launch and during it, also found that business travelers’ perception of Delta’s international schedule increased by 26% and overall awareness by 15% (via Digital Sign Today).

How Delta Microtargets Business Travelers
When Delta Airlines wanted to reach business travelers just in the New York area last spring, it decided to test the idea of microtargeting with place-based media. So it teamed up with out-of-home vertical SeeSaw Networks to create multiple 15-second spots customized to a wide array of venues across five different digital out-of-home vendors.