Skip to content
Mother Goes Regional
The establishment of Mother Productions will extend their NBC creative partnership further. The new arm will have a staff of 12-15, including writers, motion designers, editors, producers and others, and will also draw from the agency’s existing talent pool. It will orchestrate everything from station brand ID and promos to digital efforts and ads, while also creating locally-based content and relationships. “For us, it’s exciting to have a client in 10 of the largest markets across the U.S,” said Andy Deitchman. “We get that much more ingrained in those communities. We’ll explore what the best solutions are to connect across all platforms. Maybe it’s finding a great blogger who lives in that community who becomes an on-air personality. It’s creating things for people to feel more connected to their community.”

Really Giant Assholes
A disgruntled RGA ex-staffer writes: “Unlike most advertising-related copy, this is actually true. It’s not my opinion of what happened, back-of-the-box puffery or an attempt at advertising fan fiction, this crap happened. I hope anyone who stumbles on this site and reads this enjoys it as much as I did living it.”

Wants and Needs for Sale
Fellow final-Fallonite and (apparently) artist Justin Gignac has moved beyond Garbage and acquistive painting to some touchy-feely do-gooding. His first painting idea was called Wants for Sale … the idea being that he and his girlfriend Christine paint things they want and sell them for the actual cost of the item. The works ranged anywhere from $5.85 for a painting of Pinkberry to $2,500 for a painting of Betsey Johnson and Bloomingdales’ iconic Big Brown Bag to represent their desire for a shopping spree in SOHO.

They’ve now expanded on the original idea to give back to those less fortunate, with Needs for Sale. This time they’re painting items such as doors, toys, and even wigs. (Currently there’s only one painting on there though). Justin and Christine are selflessly donating proceeds of each piece to Habitat for Humanity, Toys for Tots, and Locks of Love respectively.

Willoughby Windows: Vacant Brooklyn Block Becomes Street Art Gallery
Rather than have an entire block of empty boarded up storefronts, local arts group Ad Hoc Art and non-profit community development organization Metrotech BID partnered to transform the row of stores into a gallery for street art. Over 15 artists were invited to create site specific installations in the windows, many of which nod to the former businesses they inhabit.

the knitted convenience
Sydney-based suburb of Darlinghurst recently received some of their own knitted magic from the hands of Newtown knitter Denise Litchfield. Wrapping Sydney’s oldest functional underground “heritage toilet” in Taylor Square, Litchfield started planning the project back in May 2009. 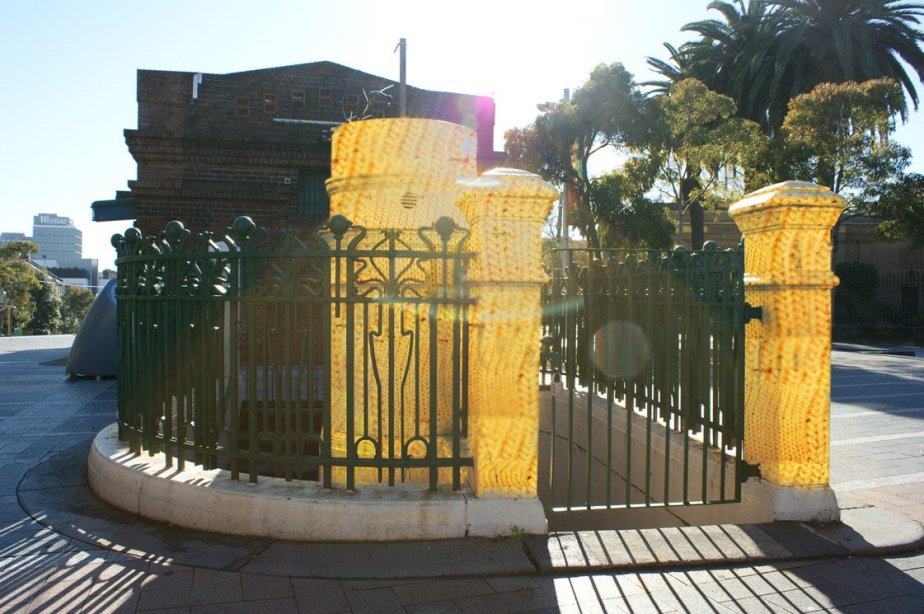 Guardian considers ‘members’ club’ to boost revenue
The Guardian is considering launching a “members’ club” that would provide extra benefits to readers, such as exclusive content or live events, for an annual or monthly fee, as its digital director Emily Bell ruled out bringing in a paywall. The paper sent a survey out to its registered members yesterday which asked what would entice them to sign up to the scheme.