Drainspotting: A Book About Japan’s Manhole Cover Subculture
Kenji Summers points to Drainspotting – a photography book of Japan’s custom manhole covers, found across nearly 95% of the country’s 1780 municipalities.The book features a curated selection of over 100 photographs, capturing the best and most visually compelling of Japan’s 6000 distinct manhole cover designs, part of a 20-year beautification program — orchestrated by what’s essentially Japan’s version of the WPA — aiming to make manholes reflect the uniqueness of each city — its mythology, its aesthetic sensibility, its legacy and essence. 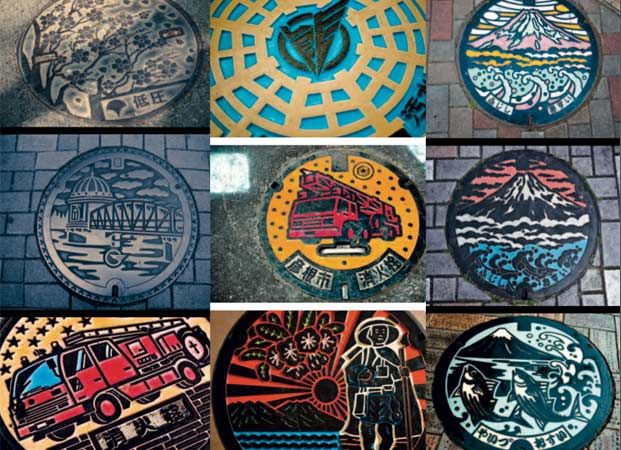 How-To: Lessons Worth Learning from Twitter’s Success
By any measure, the growth and popularity of Twitter has been phenomenal. To say that Twitter has hit mainstream isn’t really the right metric to use. It’s more powerful to note that for a large group of Twitter enthusiasts, to spend even a day without using it would be as bad (or perhaps even worse) than not having email. It has become just that necessary.

The Death of Postmodernism and Emergence of Altermodernism
If early twentieth-century Modernism is characterised as a broadly Western cultural phenomenon, and Postmodernism was shaped by ideas of multi-culturalism, origins and identity, Altermodern is expressed in the language of a global culture. Altermodern artists channel the many different forms of social and technological networks offered by rapidly increasing lines of communication and travel in a globalised world.

Obamas ring in inauguration with J.Crew
At today’s inauguration, Michelle Obama accessorized her yellow Isabel Toledo sheath with cashmere-lined green leather gloves from J.Crew, while daughters Malia and Sasha were dressed almost entirely in the retailer’s preppy fashions. But don’t rush out to the nearest J.Crew store to get the same look: The only items that came off the rack were Michelle’s gloves. The girls’ overcoats were designed exclusively for them and were made in “one-of-a-kind colors,” said J.Crew spokeswoman Margot Fooshee. “Some of the pieces, including the coats they were wearing, we’re looking at incorporating into our fall assortment for 2009,” Fooshee said. In recent months, Michelle Obama has been a vocal supporter of J.Crew, telling Jay Leno on the “Tonight Show” in October (while wearing a sweater, tank top and skirt by J.Crew): “We ladies, we know J.Crew. You can get some good stuff online.” 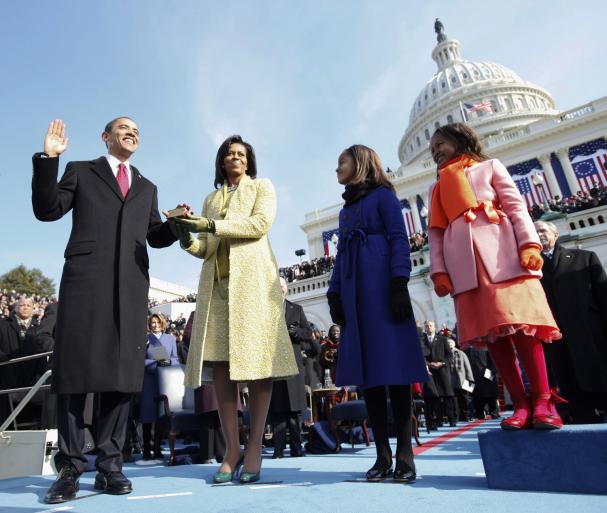 Seeking Obama Fashions, Visitors Crash J. Crew’s Web Site
Some inauguration viewers were fascinated by the historical tidbit that President Barack Obama took the oath of office on Abraham Lincoln’s Bible. Others were more interested in the J. Crew sage green leather gloves that Michelle Obama wore to hold the Bible for her husband — not to mention the pale pink and royal blue wool coats the Obamas’ daughters wore, also from J. Crew.
Audi, J. Crew Win Big in Obama Inauguration; Twitter Falters
For media companies and marketers riding the wave of interest in President Obama’s inauguration with tie-ins, promotions and advertising, it amounted to a slam dunk. But some played it smarter than others. Audi, J. Crew Were Two of the Biggest Winners; Twitter Battled Delays.

The 20 Cent Breakfast: Deep Recession Discount
We’ve seen a lot of businesses slashing prices and offering all kinds of special deals to get people buying during these sluggish economic times-but this is outrageous. Casa Havana has been running a “recession special” since mid November, that offers a full breakfast for a mind-blowing 20 cents. It’s unknown how the the New York restaurant can feed you for such low prices, but it’s at the very least a great marketing gimmick. 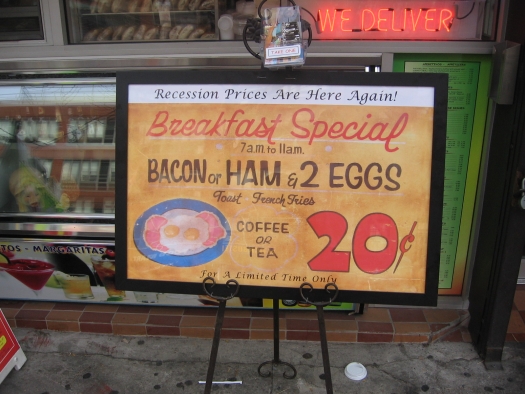 SantaCon NYC
Santa hits New York tomorrow. Or rather, hundreds of Santas do, all attired in traditional red suits and white beards, carrying the nontraditional MetroCard and occasional hip flask. It’s Santacon, when hordes of St. Nicks ride subways instead of reindeer, down pastrami and booze instead of cookies and milk, and create holly jolly mayhem in holiday stomping grounds like Central Park, Times Square and strip clubs.

Return to the Golden Age of Cigarette Advertising
An exhibit of print advertising is as filled with stunning creativity as it is with pure horror. Santa Claus hawks cigarettes. Doctors recommend cigarettes as cures for various ailments. Dentists urge their patients to smoke. Babies endorse the cigarettes their “daddies” smoke. The display — covering ad agency output from the 1920s to the 1950s — fills the walls at the Science, Industry and Business branch of the New York Public Library. 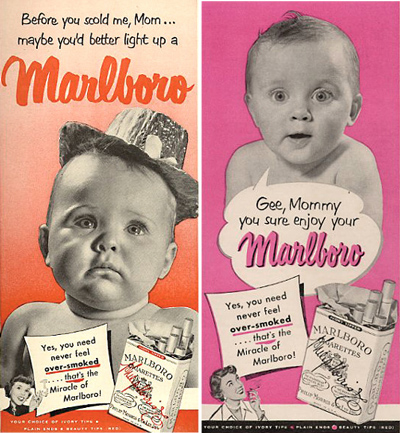 Lego Hip Hop Album Covers
The progressive online publication, Format Magazine, just took playing with Lego to a whole new level with their collection of 20 classic (and some not-so-classic) hip hop album covers recreated with those iconic plastic Lego men. Shot in the Format studio by Nick Hanekom, and graphically produced by beat-maker Glen Manucdoc, the little Lego guys assume the notorious album cover poses once carried about by the likes of Ghostface Killah, Biz Markie and RUN-D.M.C., to name a few.

No, not the one you thought … this is from a 1996 MacAddict article … I wonder if the guys at MediaArtsLab were subscribers …?

As the guys at Gizmodo say: ‘Look, PC users wear suits! And Apple users wear… denim shirts over a t-shirt tucked into their hiked-up dad jeans? And an earring? Yikes, Apple users. That outfit wasn’t even hip in 1996, which shows you how cool the editors of MacAddict are/were…”

Pepsi’s New Logo: What Went Into the Update
How long does it take to remake an icon? Try five months.That’s the amount of time Pepsi took to revamp its famous logo, after top executives Indra Nooyi and Massimo d’Amore called for a “quantum leap” forward in transforming the soft-drink category and defining Pepsi as a cultural leader, said Frank Cooper, Pepsi’s VP-portfolio brands.

Pepsi‘s influencer outreach surrounding the rebranding campaign included Charlene Li from Forrester, who received a package from Pepsi with the history of the logo on cans…
Yes We Carve!
Festive Barack Obama themed pumpkins. What else?

Bacon Salt
Big company efforts in social media have mostly failed to this point. Facebook‘s application platform has become a graveyard of failed attempts to harness the platform, while other brands have suffered embarrassments at their ham-handed attempts to influence the blog world. Yet for some small companies, social media has proven to be a godsend of low-cost, effective brand building. Take Bacon Salt, an unlikely product dreamed up last year after a night out drinking by two Seattle buddies. What began as a half-joking idea — what if there was a spice that made everything taste like bacon — soon became a bustling business that’s sold 600,000 units in 18 months, thanks mostly to the harnessing of the word-of-mouth power of social media.(tags: socialnetworking socialmedia branding baconsalt)

The Brokers With Hands On Their Faces Blog is a brilliantly simple idea … the title of the Tumblr powered blog says it all…! 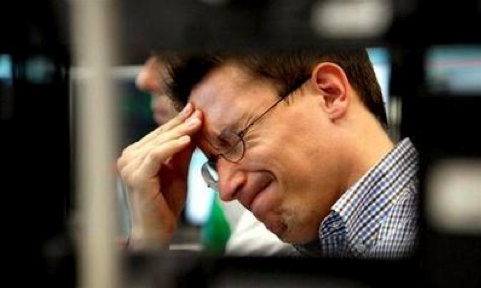 T-Mobile Android Handset Revealed Today
Around 9am this morning, T-Mobile unveiled the first Android-powered “GPhone” to members of the press. See video of the event. The handset features a touch screen and a full QWERTY keyboard. It boasts a three megapixel camera, one-click contextual search and a zoom-ready browser, as well as wi-fi and 3G capability. Support for YouTube is built-in. All users will have access to Google’s Android Market. The unit costs $179 for existing T-Mobile customers. Pre-orders will be shipped to users around October 22. T-Mobile expects to unveil the phone in 27 3G markets by mid-November.
(tags: t-mobile android gphone gaming socialmedia telecoms mobile smartphone 3g)